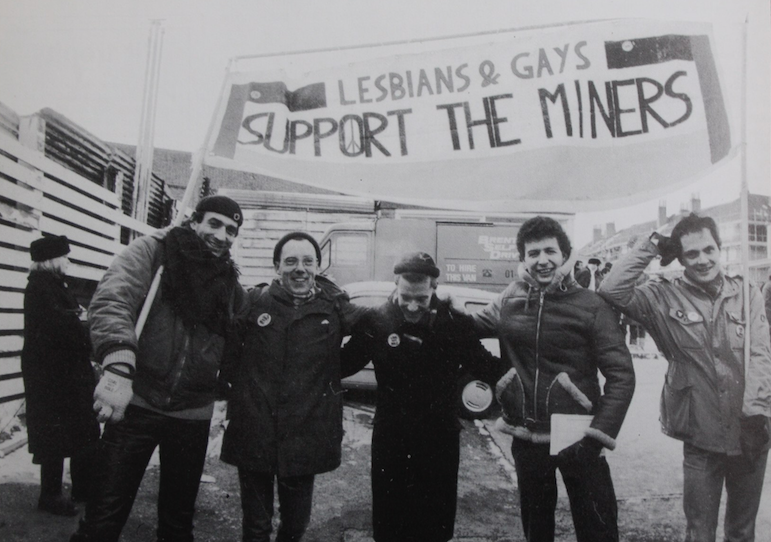 Following the success of the symposium PRIDE and its Precursors: Political Mimesis, Nostalgic Dissidence and Popular Film, held at the Birkbeck Institute for the Moving Image in December 2015, we invite submissions for an Open Library of Humanities journal special collection on Pride, the LGBTQ and coalfield cinema that preceded, influenced and coincided with it, and the diverse forms of activism inspired by the film.

Pride (dir. Matthew Warchus) was the most prominent of a number of films released in 2014 to coincide with, or commemorate, the 30th anniversary of the 1984-5 UK Miners' Strike. Based on a real-life support group for South Wales miners forged by London-based lesbian and gay activists (Lesbians and Gays Support the Miners, or LGSM), Pride helped to inspire new solidarity activism (including the reformation of LGSM) and stimulated widespread discussion. This special collection will explore the impact, success and popular film aesthetics of Pride as a political drama-comedy, as well as its connections to earlier LGBTQ and miners’ activist and community films and videos (including Framed Youth: Revenge of the Teenage Perverts, 1983/1987, All Out: Dancing in Dulais, 1984/1986, and The Miners’ Campaign Tapes, 1984/1985), and other more recent audio-visual commemorations of the Miners’ Strike and 1980s queer activism (including Still the Enemy Within, 2014, and Re/framed Youth: From Perverts to Pioneers, 2013). We would like to address questions of historical re-enactment, or re-activation, exploring how this mainstream British feature film was able to draw on the forms and energies of earlier representations and figurations of real people and events.

In the first instance, we are soliciting short written abstracts/proposals for full length written articles (7,000-8,000 words); these will be subject to double-blind peer-review. But we would also welcome proposals for audiovisual essays, or for shorter written works (of up to 1,000 words). The shorter pieces of writing might offer space for reflection on “the year of Pride,” and the kinds of activist and media forms and discourses engendered by the film’s making or release, or more broadly by the anniversary of the Miners’ strike.

Submissions are welcome from a range of disciplinary backgrounds and topics may include, but are not limited to:

Please send abstracts/proposals (up to 500 words max.) for all formats of submission to Catherine Grant (University of Sussex) and Diarmaid Kelliher (University of Glasgow) (priderevisited@gmail.com) by 31 May 2017. We expect to reply with our selection decisions by 15 June 2017. Final articles of 7,000-8,000 words for double-blind peer review (please contact the editors if you wish to propose or discuss an alternative format), including references and bibliography, will be due by 30 November 2017.

The OLH is an Andrew W. Mellon Foundation-funded open-access journal with a strong emphasis on quality peer review and a prestigious academic steering board. Unlike some open-access publications, the OLH has no author-facing charges and is instead financially supported by an international consortium of libraries.

To learn more about the Open Library of Humanities please visit: https://www.openlibhums.org/.

Featured image by Simon Murphy under a CC BY-NC license.