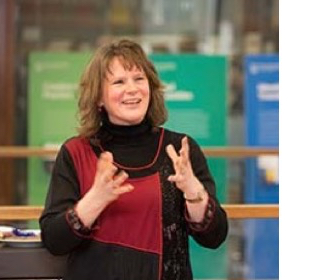 Jennifer Edmond is a recovering alt-ac professional recently named to the position of Associate Professor of Digital Humanities at Trinity College Dublin. She is also the President of the Board of Directors of the DARIAH-ERIC, a pan-European research infrastructure for arts and humanities and a member of the European Commission’s Open Science Policy Platform.

Working in the digital humanities, you get used to references to what might be called a ‘generational fallacy’. Under the assumptions of this point of view, the digital transformation of the humanities will happen naturally, not because of improvements in or proliferation of technology generally, but specifically because the next generation of researchers and research professionals will enter their careers with a far greater comfort level with technology, and therefore will naturally adopt and promote it. But my experience tells me that, in fact, this is not the case. To the contrary, younger scholars feel their precarity very keenly, and therefore tend not to be in a position to push too hard to disrupt their disciplines. The introduction of technology into a tried and tested workflow is not a neutral process, but one that has very wide-ranging implications for how the process can be justified, verified and communicated, and these are aspects of the fabric of the academy that young researchers, no matter what their expectations of or enthusiasm for technology, generally feel unempowered to challenge.

The introduction of technology into a tried and tested workflow is not a neutral process, but one that has very wide-ranging implications for how the process can be justified, verified and communicated, and these are aspects of the fabric of the academy that young researchers, no matter what their expectations of or enthusiasm for technology, generally feel unempowered to challenge.

As a contributor to the development of open science, I am often reminded of this same fallacy. For our upcoming generation of colleagues, who are so-called ‘digital natives,’ openly sharing their personal details and images on social media platforms is more natural than writing a personal letter. The widespread acceptance in this cohort of such practices leads us to believe that these individuals will be natural champions of open science. And this is, of course, not a complete fallacy: many researchers who have finished their PhDs in the last 5-10 years do promote a different approach to scholarship, and these shifting attitudes and practices have led to the rise of new metrics for assessing scholarship and efforts (including a few infamous ones) to subvert the closed business models of the past. But scholarly blogging and tweeting are still largely viewed as an informal or private manifestation of a professional identity, and Sci-Hub can hardly be considered or advocated as a platform for promoting responsible open scholarship into the future.

Above and beyond such activities viewed as outside of the mainstream, the young humanities scholar who is committed to finding her way into a research career faces high barriers to being open. For one thing, she probably will not have much access to research funding, making APCs generally out of reach. For another, technology may not be a part of her research and professional workflows. Openness may transcend technology, but it is technologically-enabled, and certainly there are many for whom the ‘tech-talk’ of open science is a disincentive to the adoption of open practices. The fact that the technological systems that support open science are still being developed, in particular for the humanities, is also an aspect that must be considered. Our digital natives may be familiar with a wide range of enterprise-level applications and platforms and the common gestures and heuristics they incorporate, but this ability and willingness to actively consume technology does not necessarily make them experts fluent in and comfortable with the limitations of emerging, niche equivalents. And it is not only the ‘tech-talk’ and technology development that may be a barrier, as the jargon and strident positions of the community of OA advocates themselves can be daunting and therefore seem, paradoxically, exclusive.

Our digital natives may be familiar with a wide range of enterprise-level applications and platforms and the common gestures and heuristics they incorporate, but this ability and willingness to actively consume technology does not necessarily make them experts fluent in and comfortable with the limitations of emerging, niche equivalents.

More insidious than these, however, is the fact that for all of the talk of open access becoming the norm, rumours and urban myths abound: about the discipline that still really only credits work published with that one, particular press; about the journal editorial committee that, in spite of the journal’s stated policy, will view work already available openly as a preprint negatively when deciding what to accept and reject; the senior scholar who states he has nothing against open science, but will take good research over open research any day; or of the publisher whose standard contract still assigns all rights for reuse of content to themselves, and none to the author. Whether these are myths or reality almost does not matter: enough of these anecdotes exist to believe in the existence somewhere of double standards in the academic ecosystem. Given that only a very small percentage of early career researchers will find jobs that allow them to continue with the work they love, we cannot expect them to be more courageous than we are when it comes to signalling their place in the culture of research and scholarship.

Given that only a very small percentage of early career researchers will find jobs that allow them to continue with the work they love, we cannot expect them to be more courageous than we are when it comes to signalling their place in the culture of research and scholarship.

And yet the generational fallacy persists. For example, one of the areas where I have been active has been in the discussion of how to ensure that researchers have access to the knowledge and skills they need to carry out their scholarship in the open. Very often, this conversation turns quickly to the topic of training. I am by no means against the idea that training should be available, though I fear that the use of this particular term carries certain implicit assumptions about motivations and types of knowledge required that may or may not be appropriate. Smiljana Antonjevich’s major ethnographic study of digital humanists, with its clear evidence that learning in the peer-to-peer, project-based context is the most desirable and effective, may well be applicable here as well, as it is often the one trusted and generous colleague willing to act as a mentor who really fosters a new conversion to open scholarship. But discussions of training also, very often, incorporate the generational fallacy at their core, focussing, implicitly or explicitly, on reaching early career researchers and, in particular, PhD students. These are, after all, the cohorts within academia most likely to be still accustomed to engaging with formal training, and (perhaps more importantly) to be in positions where certain kinds of training can be required of them. They may even welcome such training, excited by the possibilities that open scholarship might bring for their work.  But to make them experts in assessing publication choices, or in creating data management plans, does them no service if we do not also empower them to use these skills in their daily work.

This brings us back to the question of where and how we can really expect young humanists to publish, but also introduces a further question of what we can really expect them to do with training in research data management delivered with the goal of encouraging a culture of open data sharing. Of course we can provide them with opportunities to learn such skills, and we most certainly should, but can we really expect young humanities scholars trying to launch a career deeply overshadowed by the ‘publish or perish’ mentality to invest the time required to apply these methods? Preparing complex cultural data for sharing, even under the best conditions, is a time-consuming process, even before you begin to consider the challenges of negotiating shared ownership of cultural data and capturing the tacit knowledge inherent in the process of its interrogation. Add to this the further background condition that for many such researchers, the disciplinary leaders, department heads, and Deans they may be trying to win over in job interviews and promotion hearings, may not even recognise ‘data’ as a component of humanities research. The creation of such datasets may be viewed as a service or library activity, rather than research, and there may not be institutional support available for preparing and hosting this kind of data. Will these early career researchers be rewarded or recognised for their effort under these conditions? Will they feel that anything they create or any recognition they do get is portable, and will be recognised by a later potential employer? Until the generation of established researchers ensures that we can answer a wholehearted yes to such questions, the advancement of open science will be slowed.

A further juncture I have observed where we look to the next generation of scholars to make progress toward open science that we ourselves may not be able to reward is at the fundamental level of interdisciplinarity itself. In particular in the policy community, interdisciplinarity and openness are deeply entangled, as are the requirements that research solve real social problems and have an impact the public can grasp. As Carlos Moedas stated at the 2017 European Open Science Cloud Summit: “I've said it time and time again: the most exciting and ground-breaking innovations are happening at the intersection of disciplines. We need to cherish and encourage this as much as we can. But right now, our current infrastructure dissuades interdisciplinary research". The infrastructure and the barrier the Commissioner speaks of here are technical: it is the standards and platforms able to facilitate ready accessibility of a wide variety of research data. But the research system as a whole is still organised along largely disciplinarily lines: this is reflected in university departments, doctoral programmes, learned societies, and high-profile conferences and journals, to name but a few of the gatekeepers researchers look toward to establish their reputations. Do we really expect our early career researchers to do the hard work not only of having the imagination to transcend the limits of their own training, but also of making sure there are places to publish it, and stable professional positions to aspire to on its basis?

But the research system as a whole is still organised along largely disciplinarily lines: this is reflected in university departments, doctoral programmes, learned societies, and high-profile conferences and journals, to name but a few of the gatekeepers researchers look toward to establish their reputations.

It is beyond a cliché to say that the next generation of scholars are the future of scholarship, and so too are they the future of open scholarship. But we cannot expect them to do it alone. Open Science must begin at the top, and must be valued and internalised by the established and the conservative as much as by their successors. In this we must be careful not to ask more of a cohort on whom we depend, but to whom we can already give far too little assurance they will be rewarded and appreciated. Like any other social change, it is important that we build the infrastructure and advocate stridently on the public stage to ensure open science can become a reality. But at the end of the day, I believe that courage and generosity in our interactions with and interventions on behalf of researchers still establishing their professional identities may be equally, if not more, important to this end.

With many thanks to Dr Erzsébet Tóth-Czifra for her input to my first draft.

Our thanks to Jennifer, and keep an eye out for more #EmpowOA Open Insights soon!