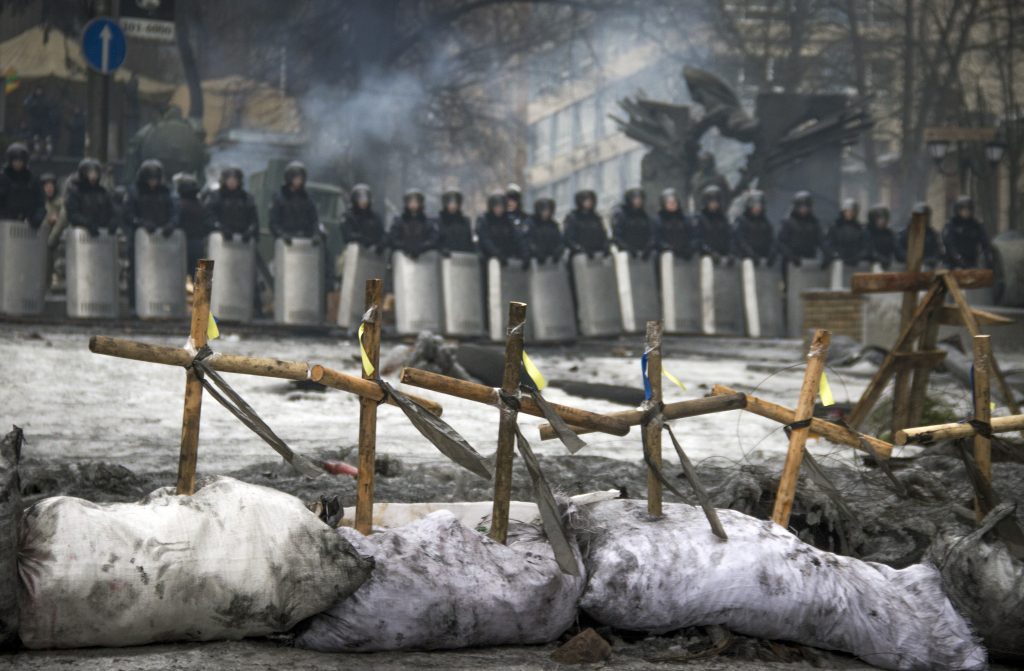 The social and political history of Ukraine in the last decades has been heavily influenced, and at times dominated, by acts of protest and resistance. As publicly enacted or cultural evocations of struggle, these acts, such as the Orange revolution and Euromaidan protests taking place in 2004-2005 and 2013-2014 respectively, have spurred pro-Western democratic change. These expressions of civil resistance have also directly or indirectly entered into the contemporary works of Ukrainian literature, such as Oksana Zabuzhko’s The Museum of Abandoned Secrets (2009); a novel which draws a stylistically complex, broad historical panorama of Western Ukraine in the period from 1940 to 2004. Contemporary protest, however, also recalls canonical manifestations of Ukrainian literature. During the Euromaidan protests, demonstrators recited Taras Shevchenko's 19th-century poetical works, which are famous for detailing various historical rebellions. Ukrainian literature is thus marked by representations of protest and rebellion. Resistance can be discerned in the anti-traditionalist avant-garde verses of Mykhailo Semenko, who belonged to the exterminated generation of Ukrainian modernism of the 1910-1930s. As acts of cultural protest, the anti-Russian poetic diatribes of Yuriy Tarnawsky from the New York Group of Ukrainian diasporic writers active from the 1950s onwards similarly echoes the dissident poetry of Vasyl Stus in the 1960s and 1970s.

Since the 1980s, the contemporary generation of Ukrainian mainland writers have articulated the cultural, social, and political contradictions that accompany the country's transitional economy. However, while the colour revolutions that took place in Ukraine in recent decades have already attracted feminist, comparative and postcolonial reflections, such as Vitaly Chernetsky’s Mapping Postcommunist Cultures: Russia and Ukraine in the Context of Globalization (2007), the encapsulation of protest and resistance in Ukrainian literature written in response to these events has not yet been analyzed. This is the case neither within the frameworks of the post-structural, post-colonial, and critical theory perspectives which have emerged from contemporary philosophy and literary theory in recent decades, nor in the wider overview afforded by contemporary explorations in the newly developing field of resistance studies.

One way in which worthwhile explorations of resistance and protest in Ukrainian literature might be developed is within the framework of Michael Hardt and Antonio Negri’s notions of empire and multitude. Expressions of protest and resistance could simultaneously connect these notions to the Ukrainian context and define their opposition across the different historical periods during which Ukrainian literary canons, modernist movements, and contemporary literature have come to life. Likewise, Gilles Deleuze and Félix Guattari’s concepts, such as the war machine and lines of flight, have not yet been brought to bear upon developments in Ukrainian literature, especially in relation to the phenomenon of protest, its narrative representations, and comparative literary depictions of protest in other literary corpora of a more canonically post-colonial form, such as Caribbean and Algerian literature. For this reason, this call for articles invites scholars to produce comparative, theoretically informed and ground-breaking studies on protest and resistance in Ukrainian literature from the standpoint of resistance studies, critiques of empire, end of modernity, the social, grand narratives and from other critical, post-structural, and post-colonial perspectives, such as those based on Franz Fanon’s works.

While public protests in Ukraine taking place in recent decades appear to differentiate the post-communist transition undergone by Ukraine from the collapse of binary oppositions associated with critical philosophical discourses, such as that of Jacques Derrida, various categories of post-structural discourse, such as found in the works of Jean Baudrillard, François Lyotard and Slavoj Žižek, can nevertheless shed interpretive light on the uncertainty surrounding the meaning, implications and causes of large-scale public events and how contemporaneous literary figures, such as Yurii Andrukhovych, Oksana Zabuzhko and Serhiy Zhadan, have approached these. Pre-independence student protests, the Orange revolution and the pro-European Maidan demonstrations can, thus, be read as surface-level cultural phenomena or as expressions of larger-scale, resistance struggles between the former imperial métropole and its newly independent peripheries. In this respect, rather than adding up to a coordinated chronology of a historical rupture that Ukraine has experienced after the 1989 fall of the Berlin Wall, the post-Soviet, post-structural and post-colonial characteristics of contemporary Ukrainian literature may be generatively compared to the literature of dissident movements, diasporic communities and artistic avant-gardes in Ukraine and elsewhere.

At the same time, the work of contemporary Ukrainian writers and poets, such as that collected in the anthologies Euromaidan: A lyrical chronicle (2014) and The heavenly hundred: An Anthology of Maidan poems (2014), and the novels of Victoria Amelina and Oleh Chynkarenko, often present a challenge to the literary canon in their blending of classically charged political narratives with non-traditional and avant-garde forms, declaring the act of writing and publishing as a resistance act within itself. Euromaidan and its continuing reverberations, which challenge both traditional and contemporary understandings of resistance, will provide a topical focus for this collection of articles, seeking to interrogate the extent to which protest and resistance in Ukrainian literature can be read as part of a wider articulation of the many acts of resistance both in post-colonial, critical theory and post-communist terms, but also as an expression of anti-imperial assemblages, the micro-physics of power and dissent, and geographically defined and culturally inflected collective identities.

Topics for this collection can include, but are not limited to:

The deadline for submission is 31 May 2017. The special collection, edited by Dr Pablo Markin (University of the People, United States) and Raphael Kabo (Birkbeck, University of London), is to be published in the Open Library of Humanities (OLH) (ISSN 2056-6700). The OLH is an Andrew W. Mellon Foundation-funded open-access journal with a strong emphasis on quality peer review and a prestigious academic steering board. Unlike some open-access publications, the OLH has no author-facing charges and is instead financially supported by an international consortium of libraries.

Submissions should be made online at: https://submit.openlibhums.org/ in accordance with the author guidelines and clearly marking the entry as [“PROTEST IN UKRAINIAN LITERATURE,” SPECIAL COLLECTION]. Submissions will then undergo a double-blind peer-review process. Authors will be notified of the outcome as soon as reports are received. To learn more about the Open Library of Humanities please visit: https://www.openlibhums.org/

Featured image by Christiaan Triebert under a CC BY license.