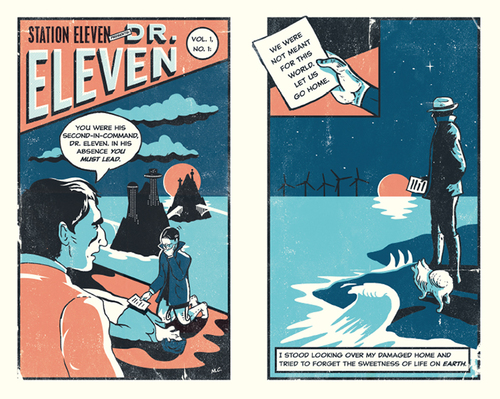 Featured image by Nathan Burton. Reproduced with the artist's permission.

Since its publication in 2014, Canadian author Emily St John Mandel’s Station Eleven has attracted enthusiastic critical responses. This post-apocalyptic novel won an Arthur C. Clarke Award for Science Fiction in 2015 and was shortlisted for many other awards, including the National Book Award, the PEN/Faulkner Award, and the Bailey’s Women’s Prize for Fiction. In this OLH Special Collection, we seek to explore Station Eleven’s position within twenty-first-century writing.

Station Eleven intersects with various debates in contemporary literary studies, opening up questions about genre, politics, national literary traditions, literary form and intermediality, popular culture and prize culture. The novel partakes in what James Berger describes as the “pervasive post-apocalyptic sensibility in recent American culture”. This sensibility is no longer the sole province of science fiction, as canonical literary authors like Cormac McCarthy and Jim Crace have written novels imagining post-catastrophic futures. Indeed Veronica Hollinger speaks of the “'disappearance’ of science fiction as a separate generic enterprise” in the contemporary and Mandel herself, Arthur C. Clarke Award for Science Fiction notwithstanding, identifies her novel as literary fiction rather than science fiction. How might Station Eleven help us to frame issues of genre in twenty-first-century writing, in particular the debate between “literary fiction” and “genre fiction”, and how are these issues entangled with the production of cultural capital through literary prizes? Biblical apocalyptic narratives, as Lois Parkinson Zamora underlines, “developed in response to political and moral crises”. To what do we owe the contemporary surge of post-apocalyptic narratives and is Station Eleven radical or conservative in the way it imagines a hopeful future after global capitalism? The post-apocalyptic world of Station Eleven is post-national.

Similarly, the reception and publication history of the novel raises questions about the importance and legitimacy of national literary traditions and awards in the age of transnationalism. Station Eleven was written by a Canadian, published first in America and was nominated for and won awards aimed at American, Canadian, and Women's Fiction. So is the novel American Literature? Canadian Literature? A new kind of Trans- or even Post-National fiction? And if it is post-national, does the text feature "the eclecticism and borderlessness in language and structure" that Aitor Ibarrola-Armendariz claims is "typical of the best postnational fiction"? Finally, the narrative’s apocalyptic erasure of borders leads us to interrogate artistic and cultural borders. Station Eleven is an intermedia text that places comics and Star Trek alongside Sartre and Shakespeare. This concern with intermediality is reflected in the novel’s materiality, as physical copies of the Dr Eleven comic depicted in the text were included in some American editions. How does the materiality of a text like Station Eleven influence our reading of its intermediality? Does the critical acceptance of Station Eleven mean that, as Wolfgang Hallet predicted, works featuring "the co-presence of different media in one work of art" now "constitute a literary or aesthetic genre of their own"? And, finally, what are the implications of the apocalyptic collapse of the “popular” and “elite” culture binary?

Topics for submission may include, but are not limited to, Station Eleven and:

The deadline for submission is 30th April 2017.

The special collection, edited by Dr Diletta De Cristofaro (Harlaxton College) and Dr Daniel King (University of Derby), is to be published in the Open Library of Humanities megajournal (ISSN 2056-6700). The Open Library of Humanities (OLH) is an Andrew W. Mellon Foundation-funded open access publisher with a strong emphasis on quality peer review and a prestigious academic steering board. Unlike some open-access publications, the OLH has no author-facing charges and is instead financially supported by an international consortium of libraries. Submissions should be made online at: https://submit.openlibhums.org/ in accordance with the author guidelines and clearly marking the entry as [“STATION ELEVEN AND TWENTY-FIRST-CENTURY WRITING” SPECIAL COLLECTION]. Submissions will then undergo a double-blind peer-review process. Authors will be notified of the outcome as soon as reports are received.

To learn more about the Open Library of Humanities please visit: https://www.openlibhums.org/.

Featured image by Nathan Burton. Reproduced with the artist's permission.